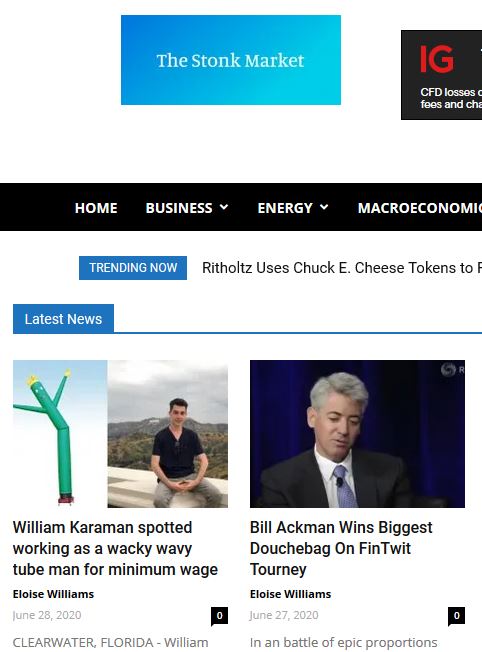 I’m an 87 year-old grandmother.  I first found out about the internet in January and decided to create a Twitter account.  I have always enjoyed investing and found a cool community called FinTwit.  Most of my time on FinTwit is spent posting trash and trying to manipulate people into giving me money.  I also run a hedge fund called Granny Capital Management and run a website called The Stonk Market.

What is The Stonk Market?

The Stonk Market is a satire site focused on the investing world.  I started the site in January and we have close to one million cumulative views now.  There have been over 30 people who have freelanced wrote for the site and a close community of 5-10 writers who create content regularly.  Currently, we are looking to create content on multiple mediums including, YouTube, Instagram, Twitter and even podcasting.

Please follow some of The Stonk Market’s more prolific writers:

The Biggest Douchebag of FinTwit Competition?

The Biggest Douchebag of FinTwit was a bracket style competition Chadford Whitmore VI came up with. To come up with contestants we asked FinTwit who are the biggest douchebag’s on FinTwit which we used to generate our list of the 16 contestants.  Overall there were 253 entries. The winner of the competition was Bill Ackman and runner up was Ross Gerber.

Do you trade stocks?

I only trade bankrupt stocks on Robinhood.  I also spend a lot of time trying to think of good ways to commit securities fraud.  I’ve probably made over $100,000 stealing money from purses of old women.

Who is your investing hero?

My investing hero is Violent J from the Insane Clown Posse.  A lot of people might not know, but Violent J has generated a 27.5% annualized return in his portfolio since 1999.  This effectively makes Violent J one of the best investors to ever exist.  Violent J has even ran a few activist campaigns and is on the board of directors of a few micro-cap stocks.  I actually have a good chunk of my net worth invested in his “friends and family” fund.

Do you invest in anything other than stocks?

I’m actually one of the largest slumlords in North America.  I own over 69,000 units and rent primarily to the poor (dumb).  I recently figured out that if I install hidden cameras in these units I can sell them on the dark net and make a ton of money.  My NOI has increased 40-fold since installing these cameras.