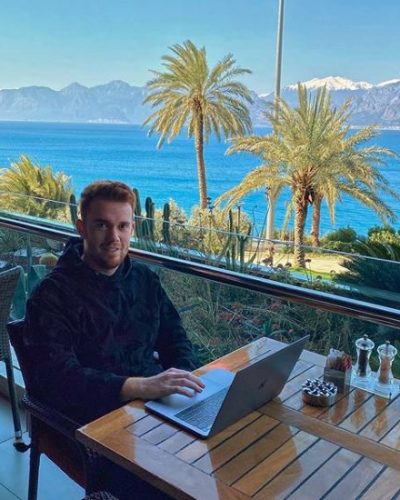 See that picture of Dan Legg? Token scammer picture of a "trader" who is just trying to sell you something. Any real trader does not sell courses as they would rather trade and make money themselves. They also wouldn't be seen dead posting a cheesy picture with a laptop like that. Especially a "trader" who is 20 years old and just promoting a "trading education company" by showing expensive cars and private jets on Dan's Instagram page @ dan_teamfx

From starting out with what he describes as "an uncertain future"... That's what any good scammer calls it as they want you to feel like they were once just like you. Dan now claims to fly on private jets, own two houses and pay his parents salaries.

Dan says he started trading when he turned 18 in August 2017. He started learning by watching YouTube and he saved up 500 pound and then quickly lost it in the markets. He kept persisting with FX trading and then he had a 15,000 pound single trade win. On a 500 pound account we know that is just dumb and probably BS.. If not, he is just way too leveraged for any real trader. From there it is very vague and he just set up Team FX and started teaching people "how to trade FX". And yet people paid him money to learn? Come on people!!! What is wrong with you? Dan Legg says his net worth is two million dollars. We have been told it's much closer to a $400k net worth.

Let us guess he either just sells poor quality education or he sells something like the IML trading platform scam? Please provide us with your reviews of Dan Legg's trading courses and ability below.